Eleven weeks ago we brought our little brood of rescued battery chickens home to roost in our yard.  Since then they have thrived in ways I never imagined – though we did hope, from the British Hen Welfare Trust paraphernalia that we had read that they would eventually do so.  Akira is faithfully waking earlier and earlier to let them out to roam about as close to dawn as possible, and they linger about either in the house or nearby at dusk so that we can shut up shop for the night.

The girls spend their days scratching, pecking, dust bathing, pooping and sunbathing about the yard.  After a couple of weeks of keeping them in or near the coop, we let them roam free just before I started work at the University.  Pretty soon they found the outer limits of the property – and can often be found somewhere on the driveway scratching around as we come home from work in the early evening.

We feed them a high-protein ex-bats feed that has enabled them to feather up rather remarkably, and they all look luscious and feathery (apart from bossy Mrs Cluck, who is only now sprouting new neck feathers).  There was a brief hiatus of moulting in February, and they went off the lay a little.  But now they each lay an egg daily…so we are having to find alternative means of distributing the excess!

At first they were not so clever in the adverse weather, but it was pouring with rain yesterday morning and they had all taken cover under the hedge by the time we left for work.

It took a few weeks to establish the pecking order, but we think they have it sorted now.  Being able to free range means the lower order chooks don’t get pecked at much, and Mrs Cluck (who is definitely in charge) gets first choice of food, and calls the alarm when things look scarey, but otherwise seems to do little to assert her power these days.  One of Mrs Cluck’s recent funny habits is coming to the front door in the evening, triggering the sensor light in the dusk, and hanging out enjoying a little extended ‘daylight’.  Today she killed and ate an ENTIRE shrew…so she will either be in a bad way in the morning, or she is truly the most omnivorous one! 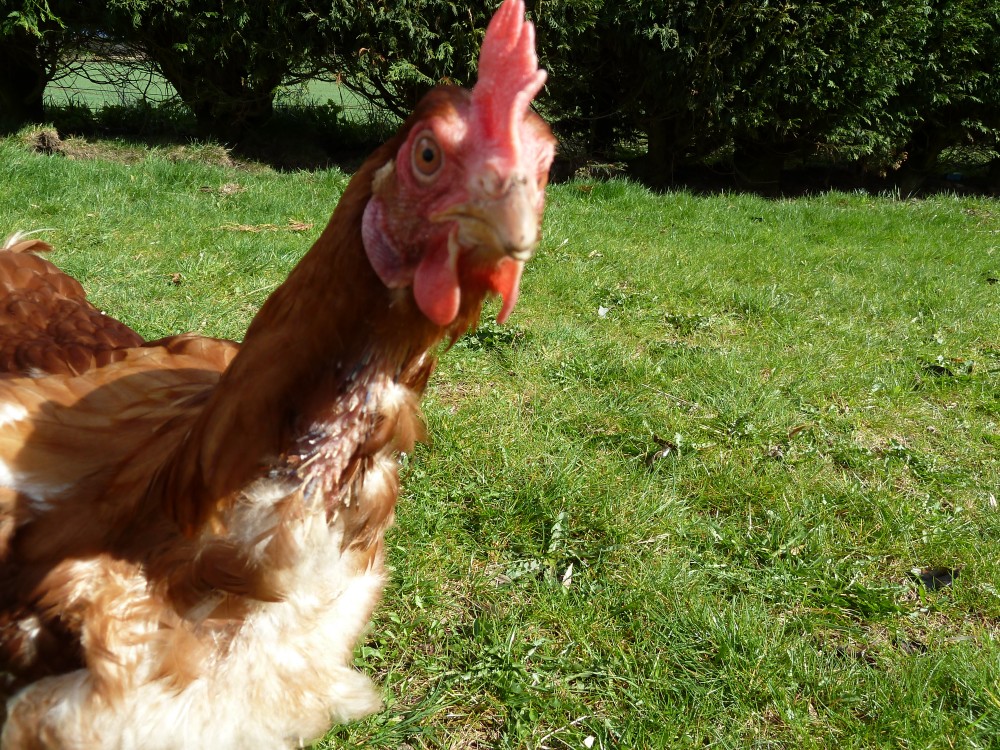 Feathery Frou Frou keeps a bit of a low profile.  She drifts about with Mrs Cluck and Floppy Comb most of the day and has feathered up rather beautifully.  her comb is also a lovely vibrant red.  Secretly, I think she may have been the egg-freeloader for a while, but she seems to just follow the crowd most of the time and is also a little more wary of us.

Floppy Comb is probably our favourite.  She is a gorgeous gingery-golden colour and has an inquisitive and very cheeky nature.  Floppy is the most likely to take risks and try new things.  She comes running whenever we appear outdoors and even jumps up on the living room windowsill to say ‘Hi’ if she spies us in the lounge.

Little Naynaynay Number Four is looking pretty and feathery (apart from a wee bald patch on her head – probably the permanent result of endless battery-induced pecking) and although she has a funny habit of facing the world with her blind eye – and thus never really knowing what is going on – she seems to get by in her own chickeny little way.  We were not sure she would make it, but she has been the most consistent layer, and seems to love having enough space in which to thrive.

We cleaned their house out a few weeks ago, and now that they spend all their daylight hours outdoors, the whole set up seems to be rather low maintenance and quite a happy addition to our little rural hideaway. 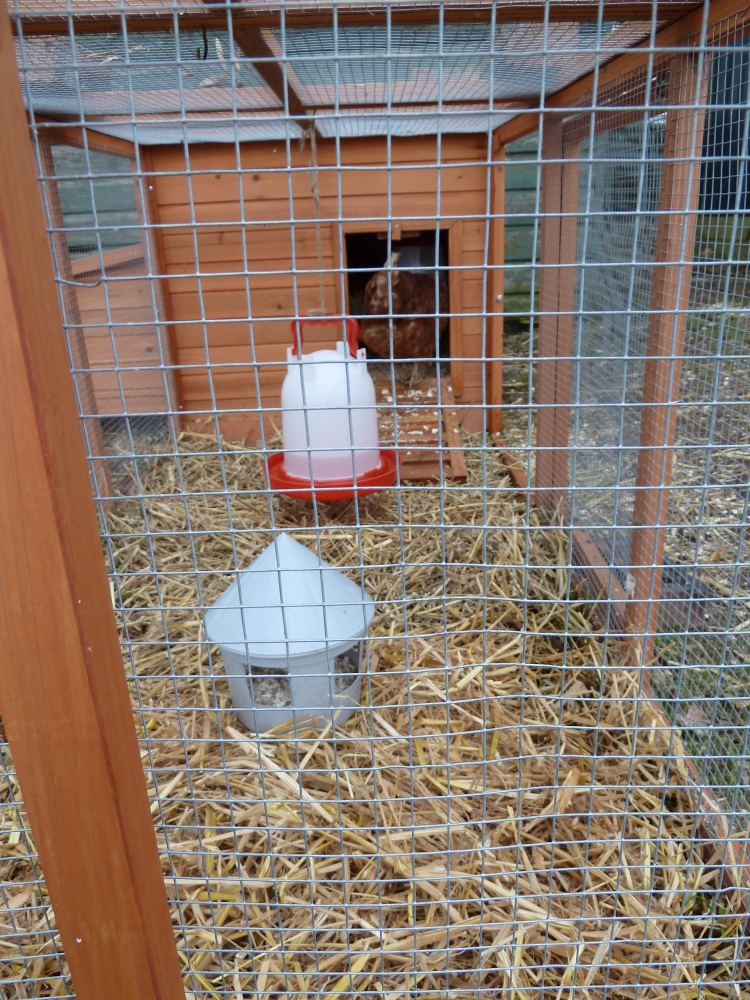 Our big challenge now is to find chicken minders for any holidays we plan to take this year.  An advert in the student job shop has yielded a few interested parties – so I am feeling hopeful that having chickens will still mean the best of all possible worlds.

The best part of this endeavour has been that Kazuo is devoted to the chickens.  He finds them hilarious, charming and a little funny.  He is so happy now that the long evenings means time with the chooks when we get home from town each day, we have to drag him away for dinner! They think his fingers look like worms and Floppy Comb makes a bee-line for the little person to have a peck at his fingers whenever he is out and about. 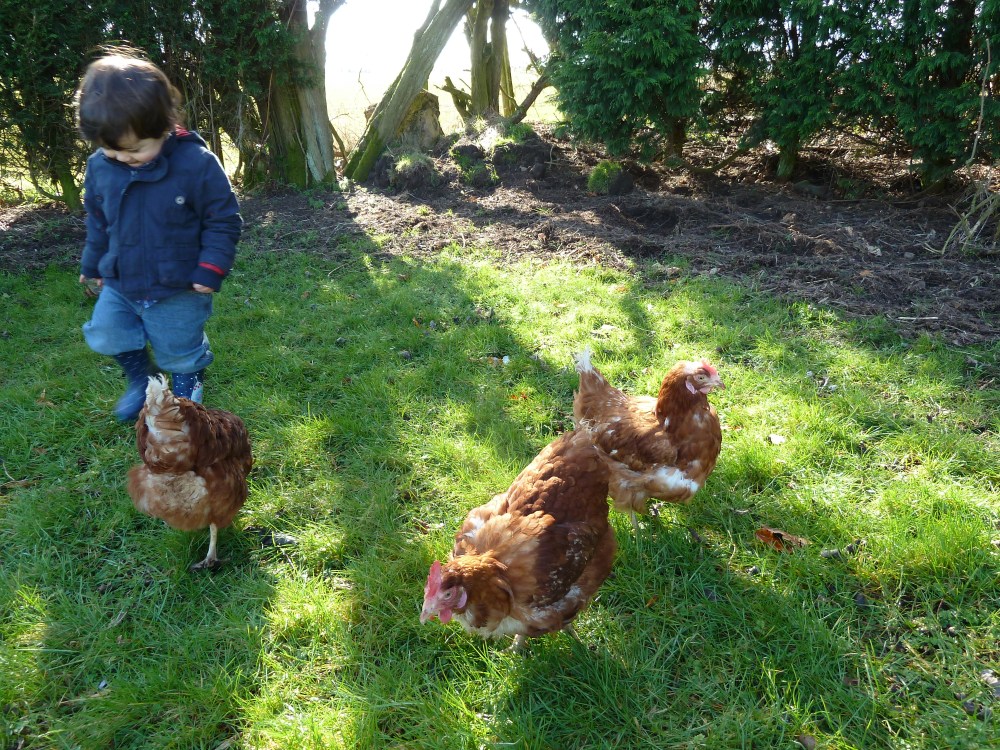 3 thoughts on “How Are Those Chickens Getting On?”