This morning Akira said – ‘You have to blog about Tom McRae’… ‘Why?’  I thought.  He blogs quite nicely himself over on  McRaetheism.   And so he does… but turns out Mr McRae is entering the fray again and trying to promote his music… he is working on a press release.

Now, I don’t really have anything to offer him as a self-marketing strategy, since I am sure he has done enough of that already in his musical career.  But I did want to tell you that he is out there.  Because frankly, I had never heard of him until I met Akira.  And his music is… well, music, so personal… but I am a convert.  And I was really grateful to Akira for introducing me… the songs are catchy, thoughtful, somewhat melancholy at times, often sharp… and the guitar – well, again, I am no critic… but this music does move me.

We went to hear him at the Cockpit in Leeds in 2006, it was a great show.  I was still finding my way with his albums, he had just released All Maps Welcome the previous year and was still in promotion mode, it was a good tour and a lively gig.

One of the most beautiful songs I think either of us had ever heard was Walking to Hawaii – we used it at our wedding (infinitely superior to the Shania Twain suggested by our celebrant… what was she thinking??) and so I still think of it fondly.  I also love Sao Paulo Rain, The A & B Song, Karaoke Soul and You Cut Her Hair… among others.  Have a listen.

So if this is the first you have heard from the bloke from Blighty, then look him up on his webpage, and look out for the upcoming  Alphabet of Hurricanes album in February 2010, here’s hoping for more of Mr McRae! 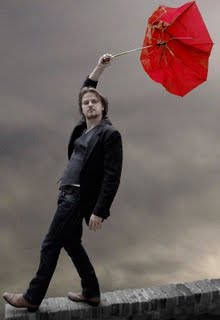