Today we brought our rescued ex-battery hens home from the farm on which they spent the first few intensive-laying months of their lives.  We found them through the wonderful work of the British Hen Welfare Trust.

These are their first few moments being settled into their new house Akira assembled for them a couple of weeks ago:

They are scrawny girls who have never walked anywhere in their little lives, so they will mostly stay in and around the coop for a couple of weeks while they get strong on the special feed we are giving them.  Hopefully they will also re-feather fairly soon too. Although we will be away on a daily basis, we are aiming to let them learn to roam about the yard as often as possible. One poor chook is very much on the plucked-chicken side of things, and seems blind in one eye – so we hope she will manage to thrive under our novice husbandry.

Kazuo has been SOOO excited about the ‘ex-battery-clucks’ for some weeks now – so it was fantastic to give him some soon-to-be-cuddly new friends.   Since dogs and cats and hamsters and gerbils are off the agenda due to allergies, these are our pets.  They will be known as Mrs Cluck, Feathery Frou Frou, Henny Hen Hen and Naynaynay Number Four.  Hopefully they will also reward us with a few eggy treats in the weeks to come.

Kazuo had trouble containing his enthusiasm once the chicks were in their run.  It may take some time for him to realise that they are a little wary of his happy interrogations.  But two brave  girls ventured out of the run not long after their arrival (they were more sturdy than I expected, which was quite amazing given their previous lifestyle) and although one was soon scared back inside by Kaz, the other had a curious little exploration of the yard before bedtime. 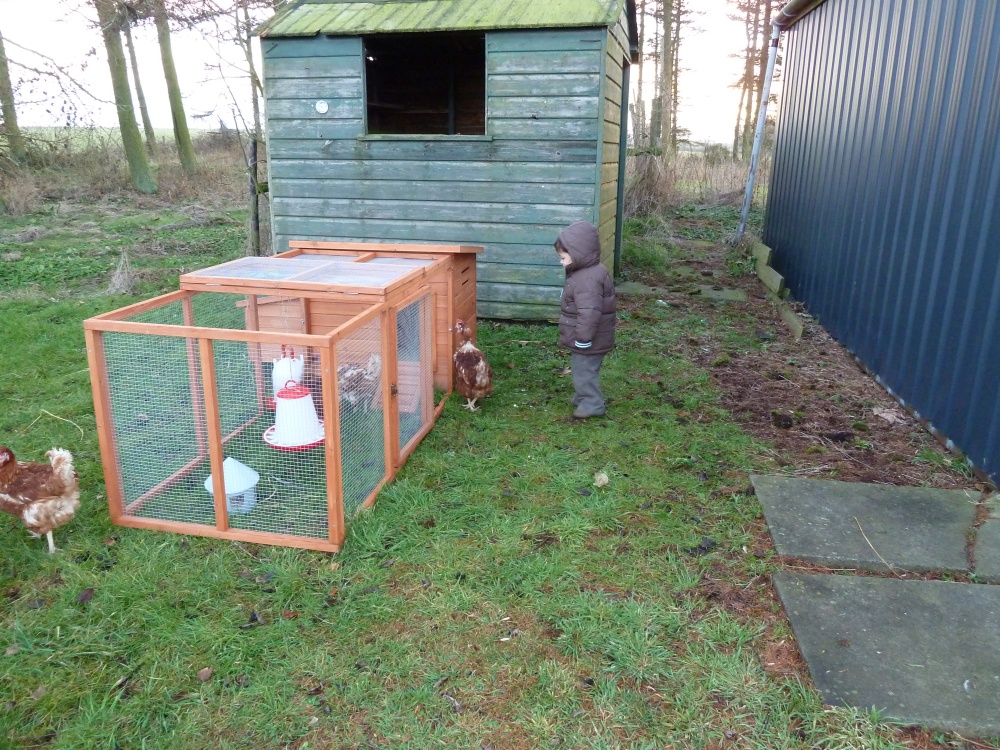 Welcome girls, we are glad you have come!

6 thoughts on “Our Girls”