Things are happening rather fast around here suddenly.  Two weeks ago we celebrated Kazuo’s first birthday, and as I already mentioned, we’d all been rather ill with a gastric flu, so we postponed the party for a week so he could properly recover.  So the actual day was spent just with Mama and Dada and a generous collection of gifts from family.  Of course, Kazuo was most interested in the birthday cards. 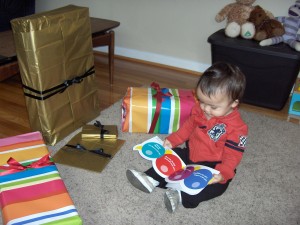 Last weekend the apartment was as full as it had ever been, we had a wonderful afternoon with everyone who has kept us going during this eventful and otherwise socially secluding first year of parenthood.  It was an easy sort of party:  tasty antipasti, plenty of lubrication, simple decor (including the bunting I made for Kazuo that I am hoping will become a birthday heirloom…it is even adaptable enough for us to remove his name and substitute in the names of any future siblings should they arise!) and an incredibly simple home-baked cake. 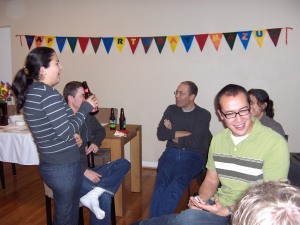 We had two little friends come to join us as well and they were happy to make themselves at home amongst all the Christmas and Birthday toys. I am loving observing Kazuo pottering about with other children. 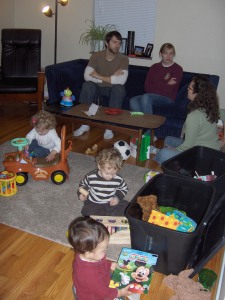 Mobility and independent tasks were our priorities for Kazuo this birthday, and he has a lovely little collection now of walking/pushing/pulling/riding toys to aid these aspects of his development.  It took a week or two, but he is now happily making use of all the bigger toys.  Here he is on Tow Mater (all bells and whistles and great for anchoring his stability and getting him sitting up and moving) and gesturing at Teddy who seems to have taken over the trike: 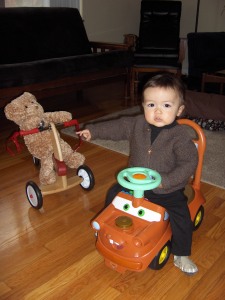 After a while on the Cars toy, he seemed to have mastered the skills to get going on his Radio Flyer trike, which will be fab in the summer outdoors: 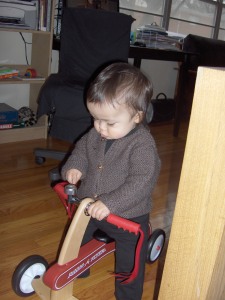 And the big success story was the wooden walking toy that he can push up and down the apartment at speed.  This has given him a lot more confidence on his feet – so much so that this weekend he has taken his first couple of steps.  Today Kazuo has been happily stumbling backwards and forwards between Akira and I when we sit on the floor with him.  It has been exciting to see him get moving and I guess he will only get more active as the weeks go by now – I am so grateful for such abundance in his little life, these wonderful toys have made an amazing difference. 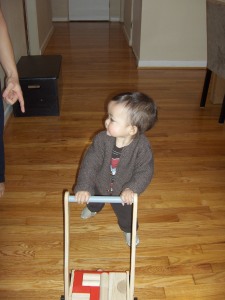 Another big change has been in Kaz’s eating habits.  We are in the process of weaning him off formula and onto cow’s milk.  We are doing it gradually by introducing the milk slowly in the formula.  Cold turkey was not working.  And suddenly, since returning from the UK, Kaz has rejected anything that seems like baby puree. It is all about the grown up ‘table food’ now, though he is still pretty moderate in his tastes and not much keen on veges.  So he will not gobble down what we eat at every meal.  If he doesn’t like it, it is NOT happening. But if he is keen, then he is all smiles and grabbing the spoon. Funny guy… but great to see him eating better on the whole.  We keep trying…

So, we have a lot to celebrate – a momentous year has passed and it seems that suddenly we have a toddler in our midst.  We are gearing up now for greater verbal acuity, increased social interactions, more mobility, better sleeping (we ALL hope!) and of course the inevitable temper tantrums – this second year will be eventful too, though for another complex range of reasons.  But for now, we are still basking in the glow of having made it through year one!