I had been thinking of upcycling a charity (op) shop cardy/jersey since last year’s stitch n bitch session where our friend Kari made amazing mittens from some old jerseys she had gathered from the Goodwill.  It sewed the seeds of using old woollies for baby clothes.  An idea I didn’t really pursue until now.  Then Louise at Domestic Scene suggested I try this 10 Min Pixie Hat and it really was a fab way to both use up as much of the jersey as possible, and to satisfy my sad need to colour co-ordinate Kazuo.

Now he has a little hat and cardy to match, and here is how I made the cardy… I drafted the pattern from some knitting I had done already that I knew would fit him from now until hopefully well into the winter (after doing a little measuring of the boy etc).

The back and front were more or less the same, with just a cut down the centre to make it a cardy… I think I could probably use the same pattern now for a pullover.  The little sleeves were cut off the bottom of the original jersey sleeves, to make for minimum finishing.  Here you see the front and back pattern pieces and the first sleeve already cut off: 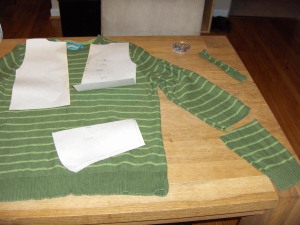 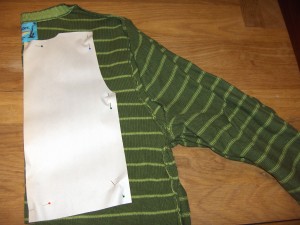 Keeping right sides together, sew fronts to back at shoulder and side seams.  Then sew the sleeves up the inner arm and set the sleeves into the armhole and sew them in.  I finished the seams using a zig zag, but this seemed to stretch everything out a bit, it would be nice to have an overlocker to trim everything up without this stretchy effect, but overall it was OK.  Then I finished the outer edges of the garment with one long hem that tucked everything out of sight: 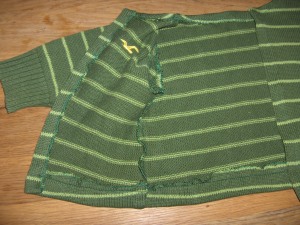 Here you can see the sleeve set into the armhole, and pins in place for buttonholes: 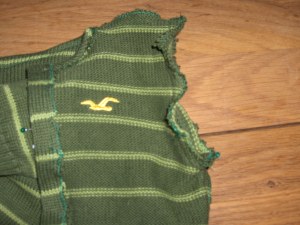 Since this was a first attempt, and I am not all that fussy mostly… and wanted the cardy to have a little quirky feel anyway… and also was out of small buttons, I used three different sized green buttons.  It was also a garment of many shades of green, so the bright green thread clashes a little with the mossy/limey greens of the jersey, but that is more of the odd charm of the cardy:

Here is the finished article – and maybe one day soon when it cools down some (temps still in the 80s during the day!) there may be a pic inserted here with the little lad in his green ensemble:

And here is the pixie hat (insider’s view) so you can see how quick and easy – I ran mine up in less than 10 mins as I didn’t put any ties on it, and it is not quite a triangle since I was just utilising the end of the jersey, but it has the desired pointy effect when Kaz puts it on:

2 thoughts on “Upcycling – Cardy and Hat from Op Shop Jersey”